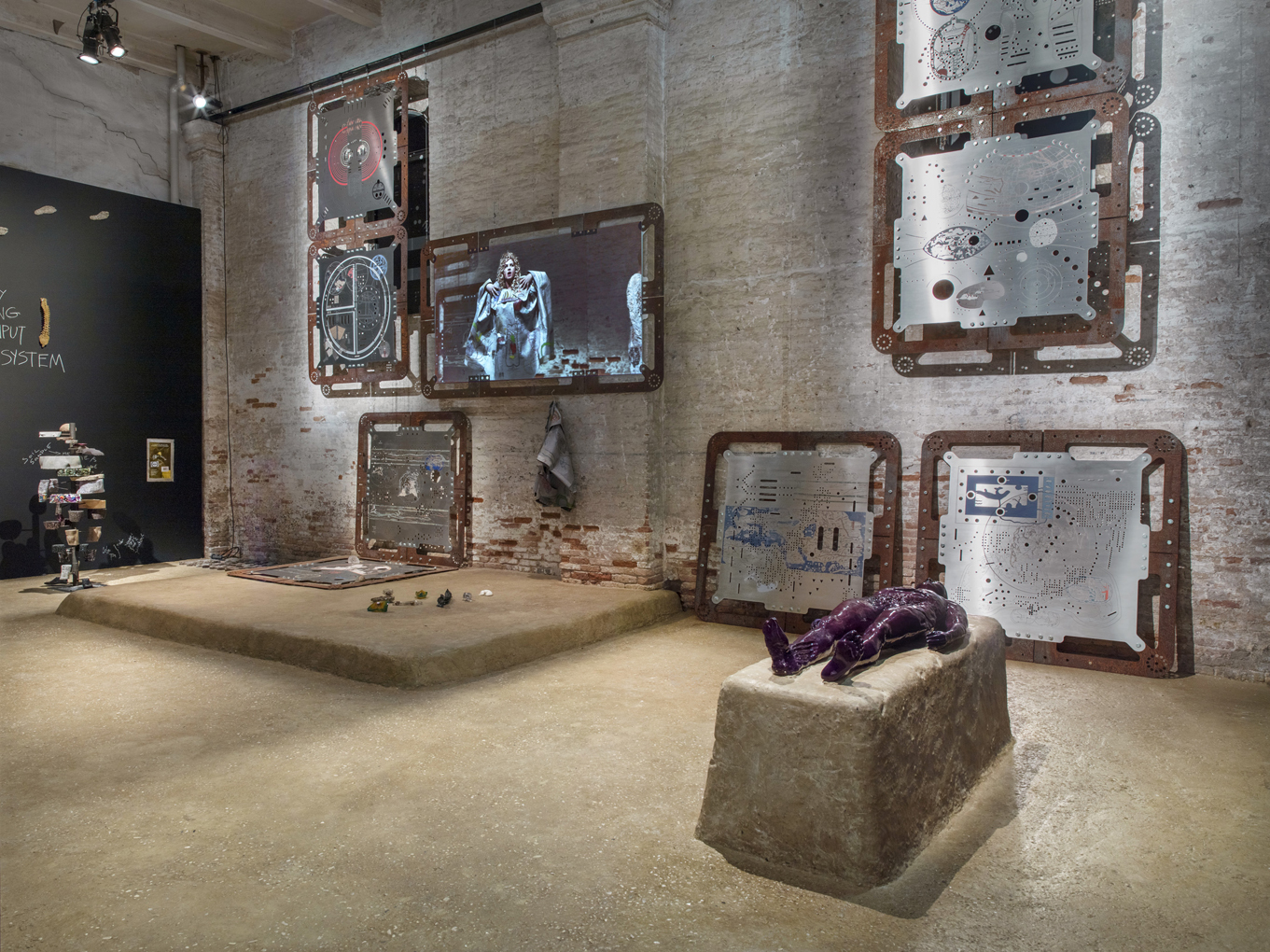 Paola Ricci: You are an artist who creates a performance with bodies, the voice, drawings and sculptures in space. You are an artist that uses these different aspects of art as a theatrical representation so that the audience can feel the distance between you and the back of the room  which creates a corridor where something may happen.

When you start thinking of a new “process piece”.  What is the first thing you try to imagine in your mind?

And do you imagine that the audience’s reaction could influence new imaginative ideas during your “process piece”?

Mariechen Danz: I would clarify and say much of my practice is process based – as in – there are main ideas that i research and the work develops naturally along with this learning process. In terms of the performances, the artworks are rearranged and reused depending on their context allowing me to explore the limits of their autonomy and how an activation through language or gestures, song or interaction can extend or elaborate on their meaning.

Paola Ricci: You create meditative and mantric monologues where the voice is more important than the text; your voice is like a liquid flowing out of the mouth and even the voices of the other people who work with you.

Is it possible that the voice is matter exploring the dimension of a liquid life moving around a space together, a liquid dimension  of  life ?

Does the music move all the objects and actions which happen during the realization 0f your art?

Mariechen Danz: All my performances are vocal based, either working within the limits of the hierarchy of the alphabet or interrupting this format of knowledge transfer by articulating sounds that take place in-between, before or outside of language. The music itself is a collaboration with musicians such as Gediminas Zygus or from my work with Alex Stolze and the band  UNMAP. The songs create a structure around which myself and my performance collaborators can position the conversation, which changes in each performance. The songs are often repeated , taking on different musical environments. The individual performances scores incorporates existing and new songs in order to allow for an evolution of both the themes as well as an organic development of the works.

Paola Ricci: In the video of your work at the Venice Biennale, 2017,  (Venice Festival of Contemporary Art) you start by describing all the aspects of your “scenography” with objects, sculptures and the human body dressed in particular clothes.

Why did you start by explaining aspects of the objects  that the audience had already seen ?

Mariechen Danz: The performances aim are to  activate, extend or elaborate on the works.  Misunderstandings, errors and the history of knowledge transfer are some of the main areas that my work is dealing with so accessibility plays a vital part.  The expected autonomy of the art object and its success or failure are inherent in this desire to activate the installations. The whole room was conceived as a sort of 3d map and so the performance is filmed from the sides,  above and also from behind the metal plates – this also gives access to details that spacially are not clearly visible due to their position eg. the world maps on the metal plates that hang 6m high.   The performance video is also simply an edited remnant of the action that has taken place in the space and i chose this time to elevate the importance of that interaction by including it in the final  installation on view.

Paola Ricci: “How to know”.  In the video of your performance (Knot in Arrow: Ore Oral Orientation), when you finish explaining and saying  “How to….” somebody in the audience  says “ know”  and then  you started repeating  “ How to know” as a singsong.

Did you repeat this because you believe in the interaction of the audience or did you choose to capture the moment, or was there another reason?

Mariechen Danz: The moment you refer to is a choreographed interaction, though it stems from previous versions of questioning where each performer responds with a different verb. How to know acts as a chant, the lyrics change from how to know to how to let go – this refers to how to obtain knowledge, always keeping in  mind the subjectivity of who is telling me what and the modes we are conditioned in – how is it possible to access another view that transcends just deconstructing ones own comprehension ?  The repetition and melody changes the meaning of the intent, altering between a calling out, a questioning and an order: let go!  This performance has more of a spectacle format  – the interaction is between the performers, their voices and the elements in the  installation – the space itself.  The performer-as-narrator acts as a bridge between the content and possible ways of seeing. Other formats such as workshops or interactive actions are also part of my practice but Ore Oral Orientation is written based on the specific collaborators present – eg. Ronel Doual is a speech therapist and singer who i have been collaborating with since 2011. Their designated roles are usually based on their abilities and our combined interests. The performers familiarity with the artworks is a fundamental aspect in introducing their functioning.

Paola Ricci: Topographic works are linked to the installation in the Venice Biennale. The study of  shapes and features of the surface of the Earth is normally the subject of “topography”.

Your works are in the Dionysian Pavilion, but when I saw your artistic ambient I imagined you as a shaman.

Did you think about this while creating your work which is a density of emotional creation about a shaman who believes in his art as a way of changing something or describing something on the maps of the Earth?

Do you think the different tones of voice that you used in your performance are much closer to these altered states or is a practice which helped you to move, draw and interact with the sculptures?

Mariechen Danz: I dont view myself  as a shaman – there are some aspects that the performances have in common with shamanism in terms of attempts to transcend the body through song but i dont claim to have any communication with a spirit world or such.  I think its easy sometimes to link that terminology with expressions that speak to something beyond human, functionality – perhaps because there is a lack of articulation in contemporary art about what is actually  involved in incorporating aspects of  faith within a practice, such as animistic tendencies.  I am interested in ancestry in terms of understanding that we are not in a conversation on /of our own and i try to penetrate the contemporary wall that is the present by tracing past steps to which we cant reach far enough back to.  For example, In terms of articulation issues, misunderstandings within communication, in the performance we  start with literally creating sounds in the body before speech towards a para -language etc.  This has developed in line with speech therapists and my own studies,  i just try to extend the timeline towards ideas of a beginning.  I would say generally the performances take different modes of articulation and utilises them in a subjective way in order to test which modes are more accessible , to devalue the hierarchy of their origin , to equalise them in order to explore how that transferal of information can best take place eg. difference between teacher, pupil ; written, spoken language etc. The performances entail a lot of confusion that is, though deliberate,  natural within an attempt to re-orientate oneself. In my experience, processes of unlearning are confrontational , sometimes even existential and i depend on the repeated chant of the questions in order to speak to that.

The content of the performance is based on past or existing concepts eg.  in anatomy, biology, geography and geology,  told through familiar roles such as  teacher, pupil,  weather- forecaster and so on. Communication through song and sound is used in order to both take advantage of the accessibility within the format of the pop song -especially melody and repetition – as well as the emotive capabilities of the sounds of the body itself.  Considering histories of past, alternative and subaltern forms of knowledge transfer allows for a re-orientation that extends beyond the limits of the latin alphabet, whose hierarchy is limiting.  Knot in Arrow: Ore Oral Orientation  focuses on an awareness of the role of subjectivity within history and the history of knowledge transfer and asks how to reorientate ourselves in order to transcend our own limits of comprehension.

Paola Ricci: Through the voice you experiment the language of nonsense and paralanguage. The songs are a way of experimenting the repetition and tones of clarification of the voice.

Why do you remain in such a rich space full of drawings and sculptures that have no sound and yet you need to touch them even if they are not instruments producing sound?

Mariechen Danz: The title Topographic mud floor  refers to the earth floor, stage , pedestal and bench – the earth and stones are venetian and were originally a house/hut and floor in the Central Pavilion of the Giardini in the 2016 architecture biennale, a contribution by Anna Heringer and Martin Rauch.   Both them as well as Johannes Lerch and Barbara Narici collaborated with me,   re-usinge the earth in order to root my installation in the Arsenale building  (prior to the long existing stone floor in the Arsenale it was simply mud).  My interest was in addressing the history of the location, the building, while tracing a timeline and process:  from raw earth – the loam – to the refined earth that is in the form of the aluminum metal plates, depicting the world maps alongside technical symbols and sockets.  The modular metal plates were designed for the windows in the Arsenale and show changes in world maps from babylonian to the 20th century.