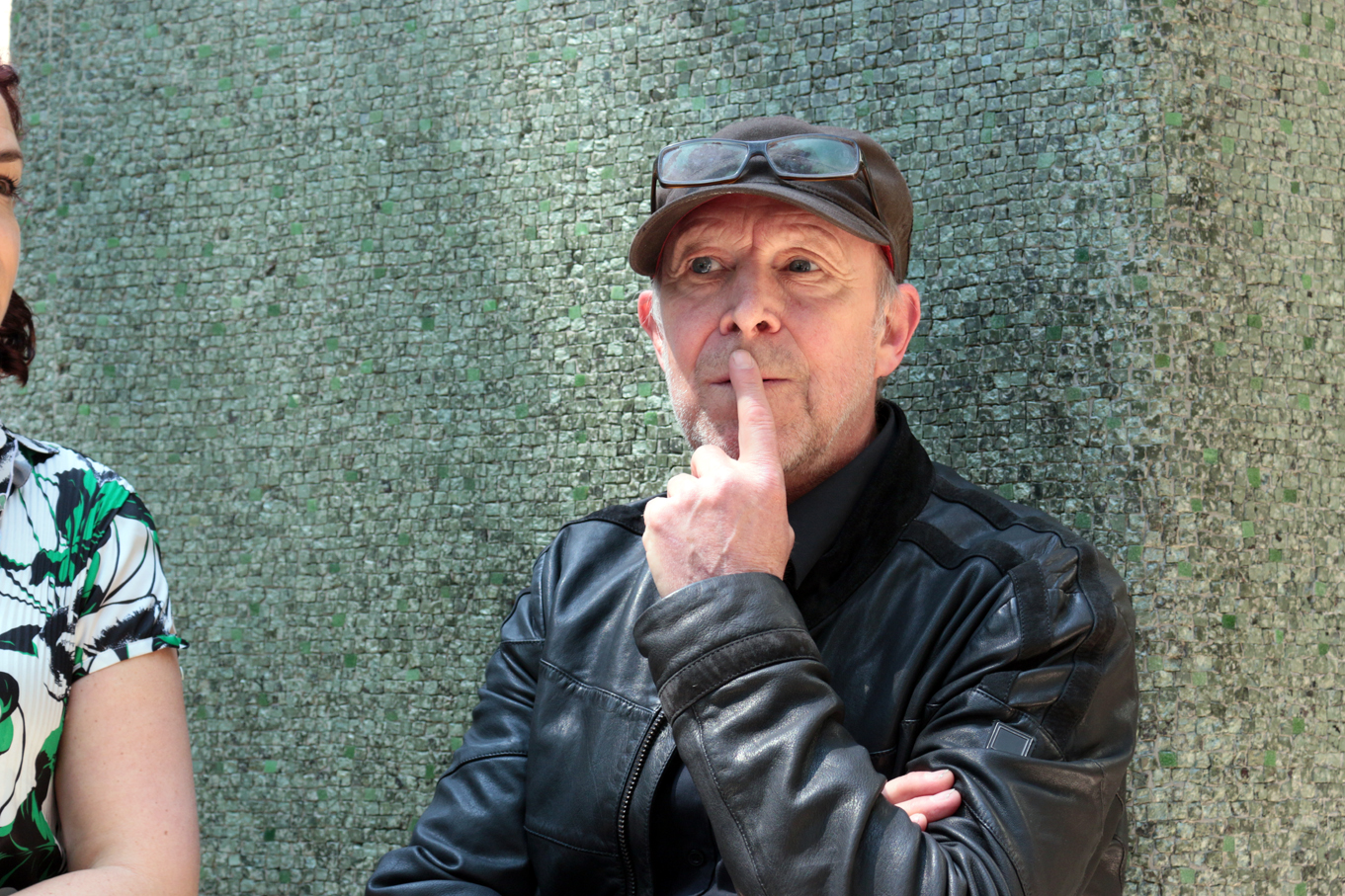 Dirk Braeckman: I don’t believe reality exists, you can never see it. We might be human, and be part of a reality, but we have not a single reference to that. We live more in a kind of dream world. Photography is even more extreme. It is the choice of a viewer, it’s a framing of the world. There is no smell involved, no sound; it is the most subjective experience there is. People think photography is the truth, but actually it is one big illusion.

Paola Ricci: All your works have in common low contrast, full density and a granular appearance, it is a kind of veil, a filter which precludes closer observation and reinforces the notion of an impression.

Is this veil also a dimension to your daily life?

Dirk Braeckman: As an artist, it is hard to disconnect your daily life from your practice. This “veil” probably has a certain dimension in my daily life, but is does not come from an aim to make autobiographical work. My photos are often described as negative or melancholy because of their darkness. This is part of our culture, everything that is easily readable and clear seems positive. For me it is the opposite: flue and dark images, to me, are “good”. This is also the way I am.

Paola Ricci: When he writes of “non-places”, the French cultural theorist Marc Augé is referring to phenomena of our globalised world. We find variants of these “non-places” everywhere in architecture demonstrably fashioned by human hand.

When you work on a new project, do you feel it is supportive to come up with definitions like these to reflect your final image?

Or do you prefer to detach yourself completely from any philosophical reference?

Dirk Braeckman: Firstly, regarding “non-places”: it depends on what you mean by that. I see them as places where you pass by, where you stay for a while, “en passent”, such as hotel rooms and hallways. I believe everyone has his own definition. To me, and for my work, it is a kind of pretext. What is seen, the spaces, the objects are pretexts that compose my images. My oeuvre does not evolve around non-places, it is more the other way around. It is part of my existence to linger in these places, because it attracts me in many ways. It is like a sort of “meantime”, like a moment of waiting. It intrigues me because it is exactly the time and the space that is found there, instead of being lost.

I am interested in philosophy and different ways of thinking and talking about my oeuvre, but it is not something I actively do while I am working. I prefer others to reflect on my images and focus on more than just their formalities (being large in size, black and white, with matte surfaces) by questioning the content of the work.

Paola Ricci:  -“I ultimately would like to scan the whole world around me, everything I encounter in it, in my own, almost obsessive way. And that’s how I try to bring order to the chaos that bombards me.”

I found this phrase on your work. I have seen an extraordinary synthesis in the shapes of your photos as if I can see the substance. Do you think that photography could be considered the image of the substance?

Dirk Braeckman: As I explained before: photography is about one sense only: the watching, the eyes. I see it as an “in-between” phase, where all other senses are switched off. The photo is always an interpretation of reality by the artist, and in my case also an interpretation of the technique.

Paola Ricci: The works look like watercolor  painting on paper, or a lithographer works on stone or the maker of etchings on zinc plate. The idea is that your works   absorb something and leave the essential in the background.

Are there any ancient artists who inspire your work?

Dirk Braeckman: Naturally I am interested in history and art history, but also what goes on in the world today. Surely every artist is influenced by the culture and art history he grows up in. This influence functions as a direct or indirect inspiration. I however do not regard my work as being a craft, like etching or lithographing. The fact that I work in the darkroom in a “crafty” way is actually a consequence of my search for making images, while in crafts it goes the other way around. While they would take their craft as the premise for the result of the work or the image, I really choose my techniques in order to make a good image.

Paola Ricci: Some critics say that you are an artist of ambiguity.

Does it mean that your works are mysterious ?

You have said: “I want [these photographic conditions] to keep on surprising me, never to become obvious.”

Is it this aspect that explains why your works appear mysterious?

Dirk Braeckman: The evident mystery in my works is something that comes forward because of the suggestion. I choose not to tell any stories, I don’t wish to share details of what or who is shown, where the images was taken, what happened, and so on. There is a lot that can be seen, but also a lot that cannot be seen, which gives the work a kind of ambiguity, indeed. Also, I am not the kind of artist that plays the lead in my own work, on the contrary: I prefer to show my work itself, not the person who made it. This equally provokes mystery, although it is not an end in itself. It is not a pose.

Paola Ricci:The formal procedures with which you systematically explore and play with photographic conditions do not boldly neutralize the subject in favour of the creation of an independent image.

Is space your subjects ? Because space includes people and other subjects .

Does space absorb the quality you desire?

Dirk Braeckman :Art and photography are always involved with space and time. One is always at a certain location at a certain moment. I do try to avoid this, more or less, by leaving out a lot of details. I never share what happened in the image, when it happened – on the one hand this is a conscious choice, on the other hand it is sometimes the case that I myself do not remember the details, because the image was recorded mostly a long time ago. All that matters is the images itself, with which the spectator is confronted.

Paola Ricci: You said this: ”My shots, my negatives, are the working material I use for the second step in the darkroom. Both steps are in fact very close together. When I’m photographing, I’m also working in my darkroom; and when I’m printing, I remain involved with the moment I took the shot. Those two steps can never be separated entirely.”

Why do you think the two actions cannot be divided ?

Are you able to image spending time in the darkroom without being surprised or having opportunity to experiment?

Dirk Braeckman :This actually is not completely correct. It is often the other way around: I try to disconnect or forget the emotion from the moment of recording. This is why I mostly use negatives only after many years, when time has caused this much-needed distance between the moment of recording and the moment or printing. Nevertheless, I am sometimes already thinking about the way I could print the image while I am shooting, what I could look like as a photo. Furthermore, I think it is important to consider the new emotion that can be raised by the print.

Paola Ricci: You said: “I think the Belgian pavilion is the most beautiful of all in Venice. If I could choose just one from the whole of the Giardini, this would be it. I always thought it would be ideal for my work: the light, the scale, the architecture.”

Is the exhibition space important to your research and are there any particular aspects needed?

Dirk Braeckman : A lot of other photographers show a certain reality in their work, framed in a passe-partout, hung on the wall. In this context, the surrounding exhibition space does not play a very big roll. In my case, since my works are large in size and “naked” – without passe-partout or protecting glass -, there is a clear physical relation with both the space as well as the spectator. So for my work the exhibition space is extremely important. This is of course the case for a lot of artworks, although some works can be just as well be appreciated on a screen or in a book. I consider my exhibitions really as in situ works, where I select and confront a group of works. Installing the works is a very important part.